Protons have a positive charge (p+)

Neutrons have no charge; that is, they are neutral (no)

Electrons have a negative charge (e-)

The protons and neutrons are found in the nucleus (in the center of the atom).

In the cloud model of an atom, electrons spin around the nucleus(like bees swarming around a nest). 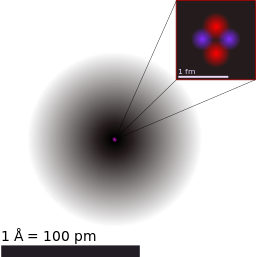 Later, you’ll learn about the Bohr model of atoms (shown below). Although we know that electrons are actually spinning around the nucleus as described by the cloud model, the Bohr model will be helpful in understanding how atoms interact with each other during a chemical reaction.

Back to the Session 1 Objectives